Kirsten put me down for a session 13:00 to 15:00 at the Bayswater Bunnings for the Kallista Kindergarten BBQ fundraiser.

Luckily she noticed I was trying to go on Saturday rather than Sunday.

I arrived a little late as Krysta decided to come just as I was about to walk out the door and then too 15 minutes to get ready.

When we arrived the little tent was nearly blown away by a strong northerly gust. It was also full of people, the line was long and sausages were being churned out at a great rate of knots.

Perhaps doing a shift changeover in the busiest period was not such a good idea. But we managed it. I was at the start of a three person process. Overall there were five of us working flat out. I put the sausages and onions on the BBQ. The next person took them off and into the tray. The third person put them onto the bread and handed them to the customers. The other two did money and drinks. 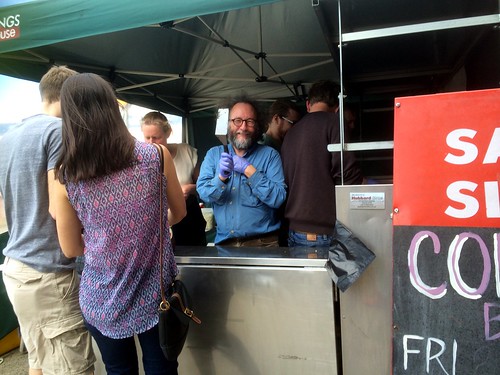 I think in the two hours I was there we sold at least 30kg of sausages. Compared to my sessions at Masters and Woolworths, I think we did at least 10 times more trade. It was even better than the session I knew the Canterbury Musical Society did at Auburn.

I suspect it was even a good day for Bunnings. It was one of the first nice spring days of they year and it was the weekend before Fathers Day. I had never had so much trouble parking in that car park.