Being from the unfashionable western suburbs I had never been to remote locations like Point Nepean. The opportunity to head down there with the older girls, who I managed to convince it was a good idea as it was an opportunity to be taken up.

Sadly we had quite a late start and found ourselves leaving just before lunch. But an icy pole each for the girls provided enough fuel to get though to a little-bit-later lunch.

It was an hour and a half to drive to where we were going, said the GPS. It turned out to be pretty spot on.

At the start I was intending to have lunch at Portsea. But, just before Rye I had an idea. I asked the girls if they were hungry. They said yes. So I suggested fish and chips. Again they said yes. Were they hungry? Absolutely. We stopped at the fish and chips shop we came to: being Hector’s Sea Foods in Rye. The place was run by a happy Chinese family. We got a basic fish and chips with pineapple and banana fritters. We probably ate the fish while it was still too hot as we were all starving. Lilah particularly enjoyed the banana fritter. She said it was the first she had ever had. 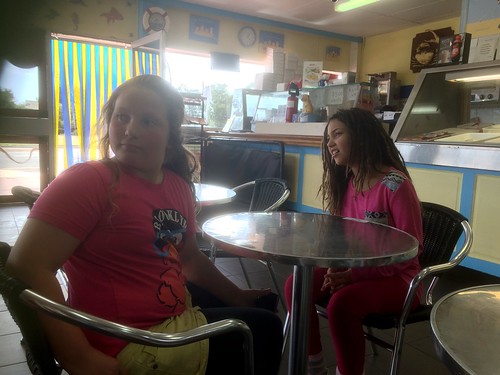 The girls played in the shallows and got a bit wetter than they really should have. 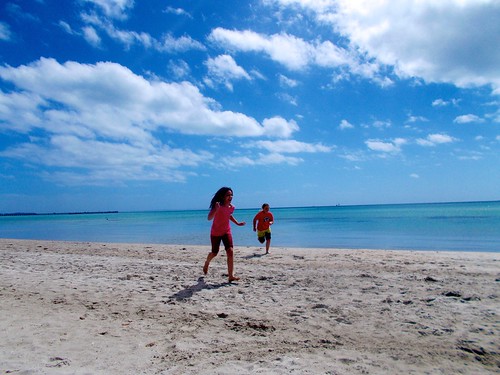 Back in the van we headed on down the road to the Point Nepean National Park. We wound and wended our way into the park as far as the van was allowed and started walking. Krysta in particular is not normally one for walking. So I expected some problems along the 3.6 km each way hike. I had also forgotten about her sore knee. Though later I was told that the doctor had recommended walking to help it get better. 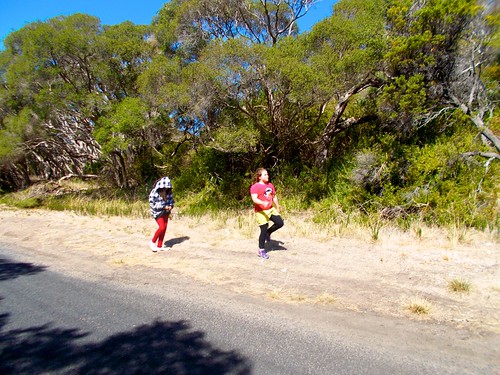 The girls were in good spirits. The sun was hot but the breeze cold. I walked in the shade. The girls, still wet from their splash in the bay, walked in the sun to speed the drying off. We saw lots of bike riders. Including a whole scout group, mostly riding back to the entrance and decided to next time bring our bikes.   Taking our time, we eventually arrived at Fort Pearce. I think it was Krysta’s first fort. The girls thought it was spooky. We wandered around the part we were allowed in. The girls really wanted to go in the rest. But instead we headed down to the old barracks site. We read all the information boards. 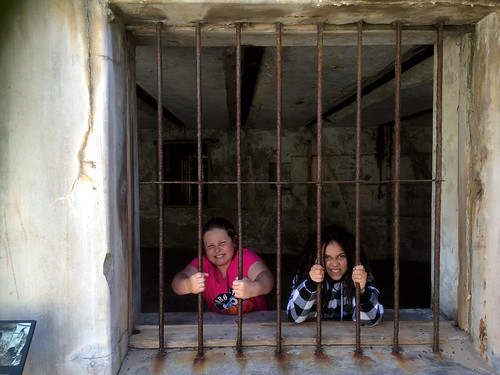 By now it was getting quite late. We made the decision to head back rather than continue on the rest of the way to Point Nepean. The girls were flagging, Krysta’s knee was hurting. So we got the last shuttle bus back to the car park.

We headed back home from the car park. The girls, being sticklers for the known, wanted to go back to Rye beach. But we stopped instead in Blairgowrie. They had an ice cream and another dip in the ocean. They asked if they could get completely wet. I said yes, but then we could not stop for dinner. They decided to get wet. Then headed up to the toilets and used the had driers to try and dry their clothes to pretend that they had not got wet.

We headed back to Lilah’s place. The girls really wanted to stop for dinner and, trying to get me to agree, insisted we have Chinese dinner. We drove much of the way back. I used an app to find some Chinese Restaurants in Narre Warren.
The first restaurant was a bit expensive. The second was now a kebab shop. The third middle of the road. As we were out of options, we went there.
The food and service was good. I had to spend some tine explaining to Lilah that with Chinese food you don’t order your own plate, but we get food to share. In the end we ended up having fish with mushrooms and beef with cashews.
Because Lilah is Jewish, we always have this problem with not being allowed to have meat and then dairy. But she is allowed to have dairy and then meat or fish and then dairy. This was originally the reason for having the fish dish. But we got around the restriction by having the Deep Fried Ice Cream first. The waiter understood the reasoning and was happy to comply. 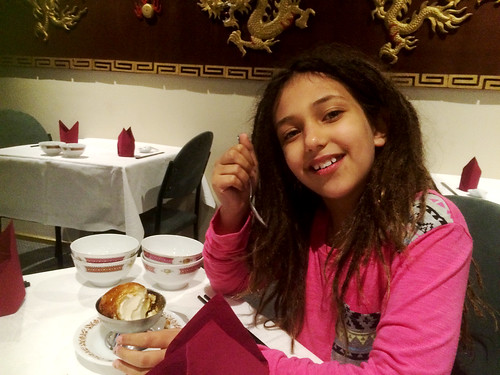 The meal took quite a while. We now headed back and were quite late for a night before a school day.