Skip to content
The site title, 馬馬虎虎 , is Chinese for so-so. It is one of the craziest of the 4 character sayings I have met and if anyone know the reason why, I’d like to know. So you may guess, my painfully slow learning of the language progresses continues. This saying was in one of the classes. I have found this wonderful site with free podcast lessons. So if you see me driving around Sydney talking to myself in schoolbook Chinese, I am listening to the lessons and practicing the Chinese. It is an amazingly effective method of learning. For those of you who want the literal translation, ma is the character for horse. If you look closely, you can see the body and head of a horse on top of 4 feet. So ma-ma is many horses. The second character (hu) is the character for tiger. So literally the saying translates as many horses, many tigers. 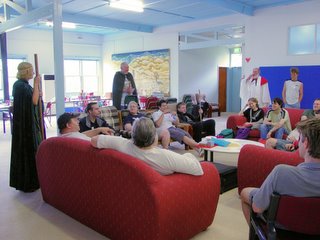 On the topic of Summerfest, the weekend went very well. It got off to a poor start. The convention is not in Bowral, but at a Marist Brother’s center near Mittagong. After that all went well. It was well run, the games were good, the food was excellent, I even got to ring the breakfast bell! The bell was attached to a chain, and located on the second story roof. The accommodation was plain but functional. They only forgot to advise what to bring. The place provided a towel, which I brought, and no soap, which I did not bring. All in all it was worth at least 4.5 stars. 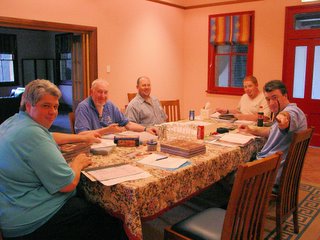 I had hoped to play a Quelland module and had my character all set up to go, but, alas, there were only LG modules. My old LG character had quite a ball, and traveled clear across this part of the game world, traveled at least 7,000 years (3,500 there and back) to see the end of an empire, fought off an invading army as part of a local militia, rescued a princess from a local war-lord, negotiated a peace with some ghosts, and sang a rewritten version of Advance Australia Fair in honor of the evil god Iuz (Advance Iuz the great) while working in a circus troop. Still he managed to scrape into third level and only lost one level along the way.